See our statement on COVID-19.

Welcome to The Center for Patient Protection

The Center for Patient Protection, now a part of PatientProtection.Healthcare, works to improve patient safety, reduce medical harms in the hospital setting and produce better mental health outcomes.  We are the oldest independent patient-centered advocacy and the first to offer an online outreach and advocacy clinic to support patients and families facing the trauma of medical errors.

We advocate, typically for the most vulnerable and frequently forgotten in our healthcare and mental health systems, for greater transparency to empower patients and families in their decisions, champion innovations in mental health care and suicide prevention like the 9-8-8 lifeline, campaign to remove gender barriers in healthcare through our Safer Women’s Health Initiative™ and our call for national action by the Canadian government to address the health consequences of gender-based violence and sexual harassment.  In all these things, we build on our extensive knowledge base of patient- and survivor-created lived experiences to assist providers in the delivery of safer outcomes and patients and families in achieving them.

Over the years, thousands of patients and families around the world have reached out to The Center for its compassionate voice and informed support. It has made The Center one of the most respected clinics of its kind and a valued advocacy for those seeking safer healthcare.

Read more about us. 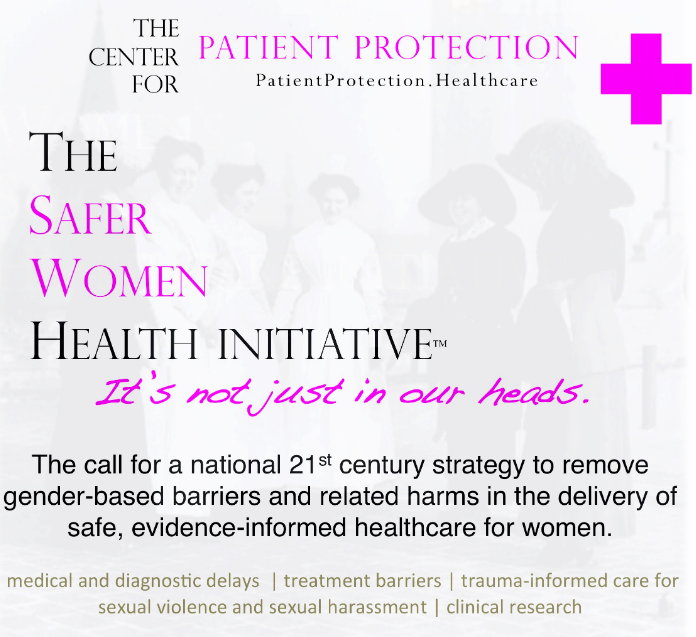 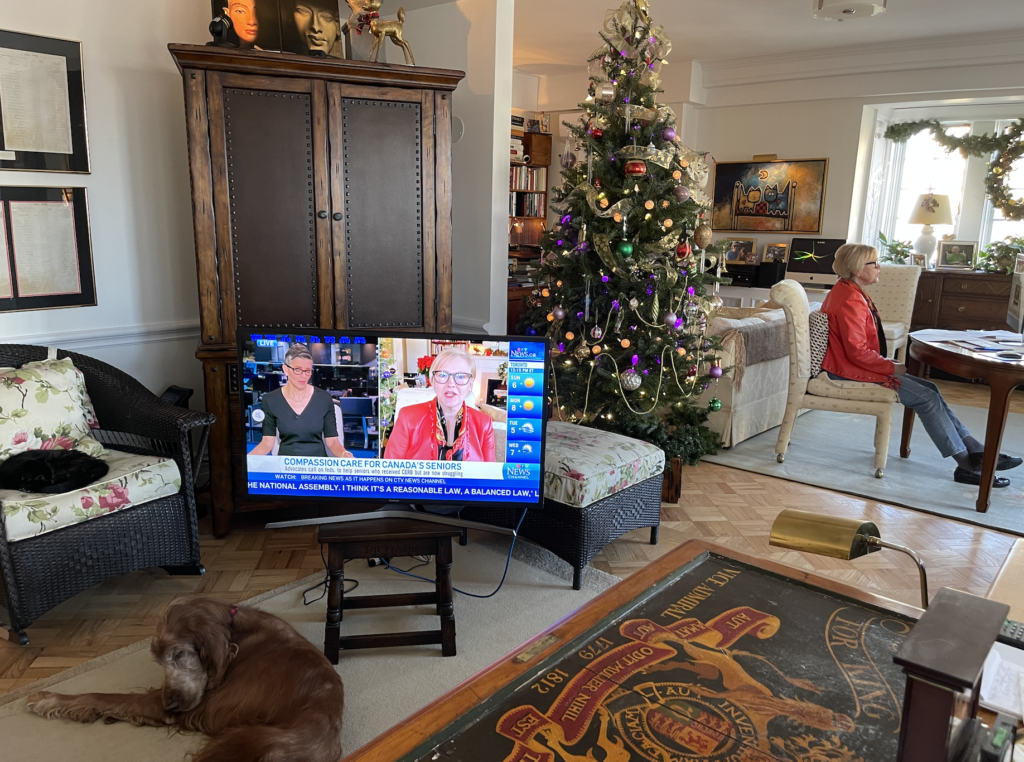 Since learning that the federal government cut off the GIS benefits of some 90,000 low-income seniors, The Center for Patient Protection and PatientProtection.Healthcare have launched a full-court press to get these benefits restored.  You can read the backstory about the cuts here.  It’s called the Guaranteed Income Supplement for a reason. It is a fundamental recognition that those who have contributed to building this country should not be living in abject poverty when their income-earning years have ended.  But by clawing back GIS payments to the poorest seniors, the government of Canada has thrown tens of thousands of the most vulnerable into desperate financial straits, forcing them to get by on less than $800/month and placing their lives and health at direct risk as a result.  We continue to receive the saddest and most harrowing stories from seniors who have reached out for help.  Many have had to stop buying and taking medication in order to eat. Others have had to give up their pets because they couldn’t afford to feed them.  Phone and internet services have been cut off, isolating them more than ever. Some have faced eviction. At least one senior has taken his own life because he could not face a cold winter of poverty and misery. In national media appearances, in op-ed columns and in direct outreach to MPs and cabinet ministers, CEO Kathleen Finlay has put the voice of The Center behind a call for compassion to get these basic income support benefits restored. You can read about some of these efforts below.  While the NDP responded to Kathleen’s urging for an emergency debate on the subject in the House of Commons, the request was rejected by the Speaker.

On December 2nd, Kathleen sent an urgent email to dozens of MPs, cabinet ministers, advocacy groups and journalists in one last effort to have the GIS restored before Parliament adjourned. No one from the government’s benches responded.  After ignoring the damage it had inflicted over the past six months, the government finally promised in its December 12th economic update to restore GIS payments to affected seniors (in some form).  Yet at the end of 2021, no such action has been taken and there is still no clear indication when this will happen.  May of 2022 is now being circulated as the likely date. That is too late for seniors who have been left is such precarious financial circumstances.  As Kathleen told CTV News Channel anchor Angie Seth, the actions of the federal government amount to institutional betrayal, pure and simple, and many seniors may be facing serious emotional crisis because of it.  Unfortunately, Canada does not yet have a functioning national toll free emotional crisis lifeline using the numbers 9-8-8 which Kathleen proposed for Canada more than two years ago. The current 800 hotline for suicide prevention is 833-456-4566.

During this seasonal time of reflection and compassion, thoughtful citizens are encouraged to write to their MP (and any cabinet minister they think they can reach) and use social media to raise their voices for fairness and action.  We appreciate MP Rachel Blaney’s steadfast advocacy to have the Liberal government restore these life-saving payments, as they promised. We urge the Conservatives, Bloc and Green parties to take an equally determined stand. In a minority parliament, every MP can make a difference.

Here are some recent media interviews and op-eds by Kathleen Finlay on this important subject. 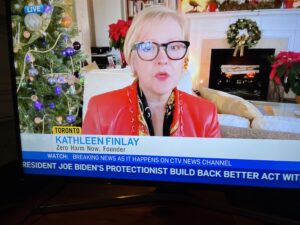 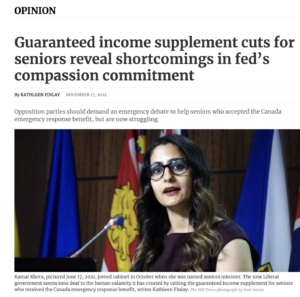 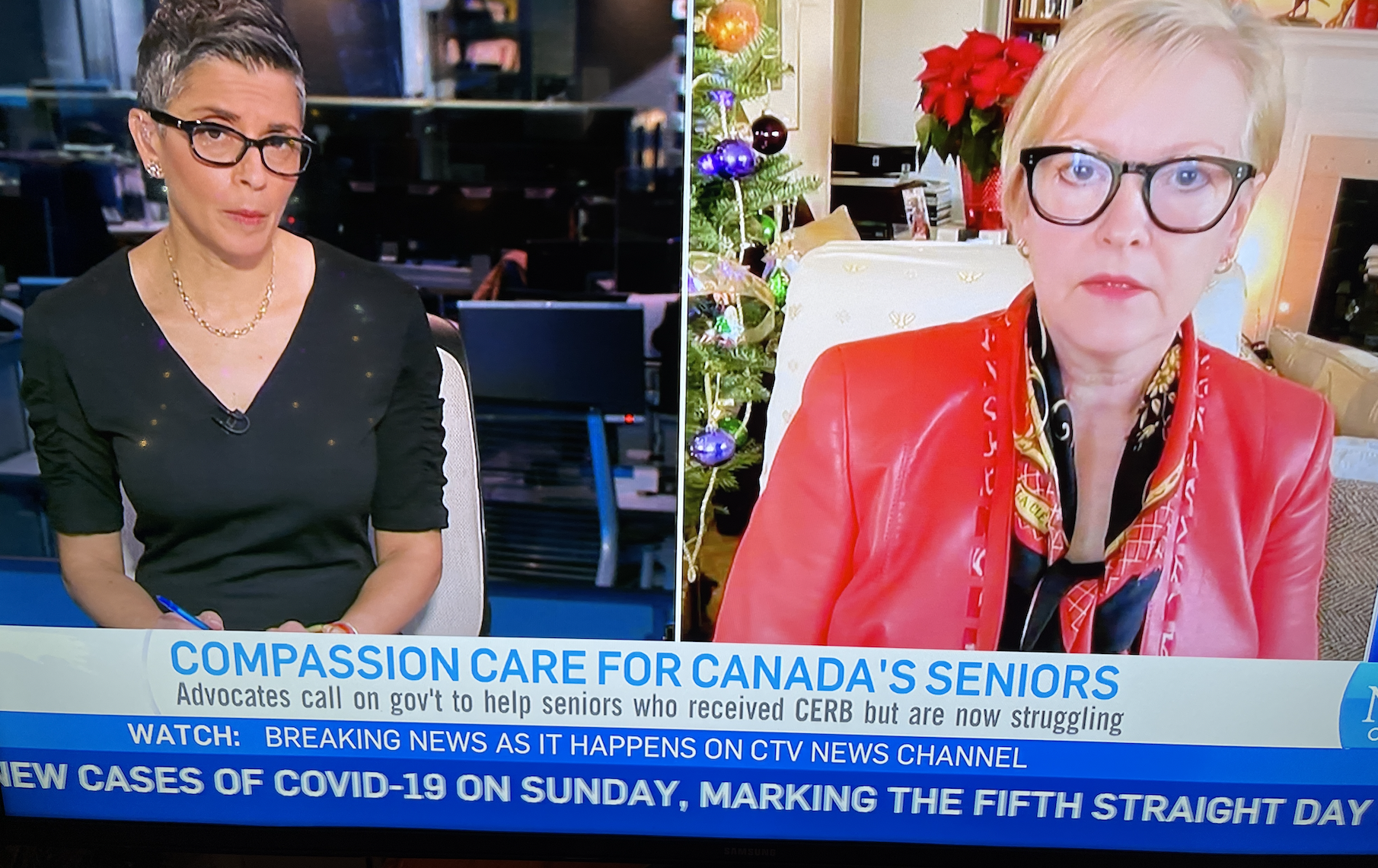 Conversations on Compassion:  My year-end interview with CTV New Channel anchor Angie Seth about cuts to the lowest income seniors, clawback of GIS benefits and other forms of institutional betrayal.

Latest in The Hill Times

Cuts to GIS benefits represents a serious threat to the physical and mental health of low income seniors.

From an interview on CBC News. 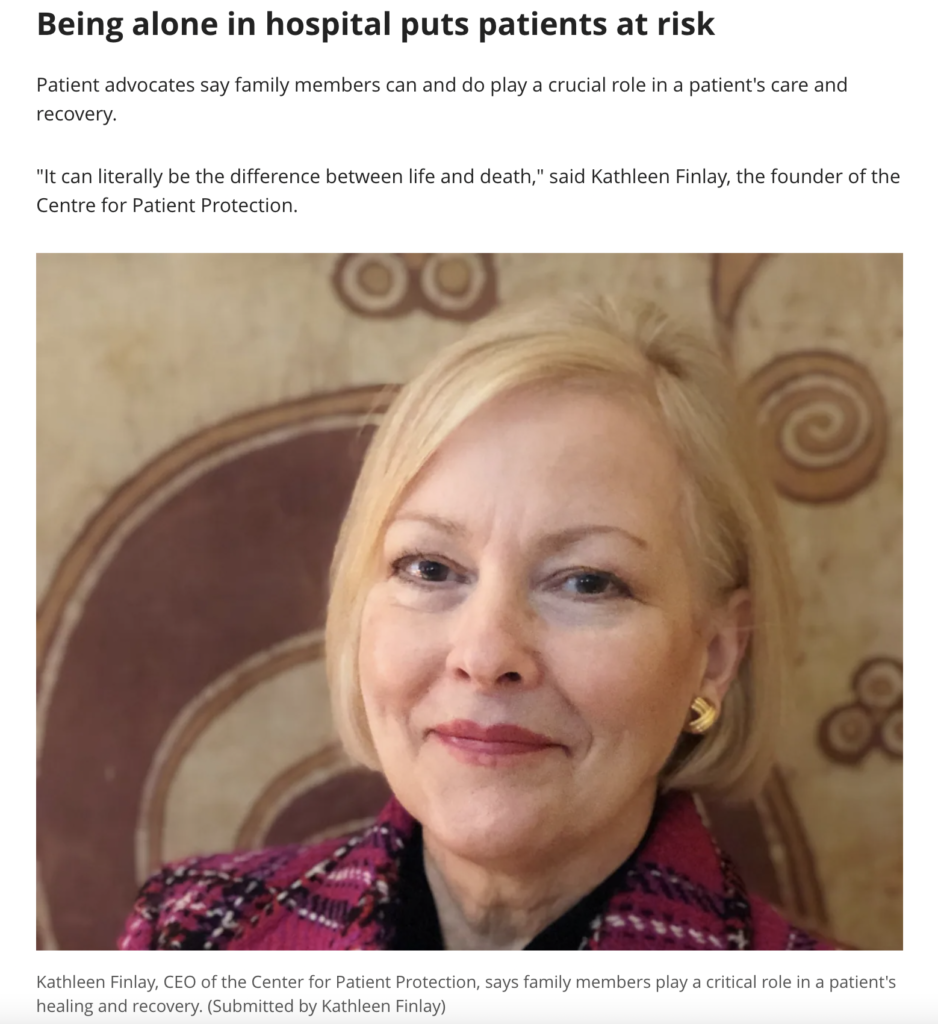 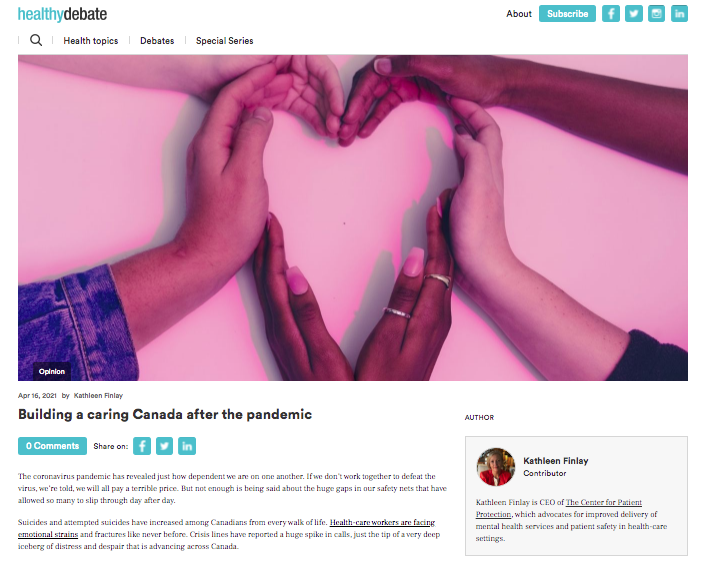 A call for a national response by Ottawa to address the pandemic’s mounting toll in mental health distress and suicide risk. 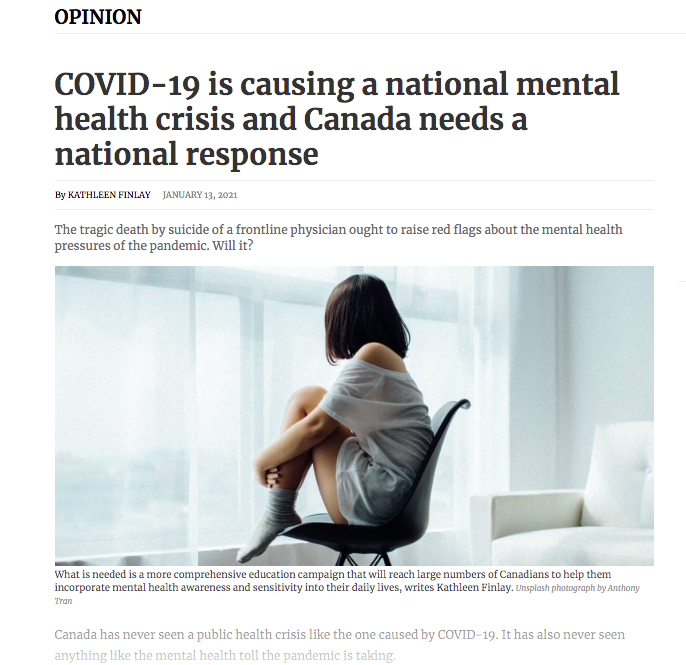 After repeated pleas to MPs, Senators and cabinet ministers for more than a year to support Kathleen Finlay’s proposal to bring 9-8-8 suicide prevention technology to Canada, showcased in her interview with CTV National News (see video below), the House of Commons finally voted in December 2020 to support the idea. Only one MP participated in the debate. No one else said a word. No mention was made by anyone of the family-victim campaign that introduced this life-saving innovation to Canada.  The introduction of 9-8-8 has been stalled in hearings before the CRTC ever since.  In all those months, no one from that agency has ever contacted the person who introduced the idea to Canada.

A call for a national soul-searching on mental health and suicide. Kathleen Finlay’s latest column in NOW Magazine 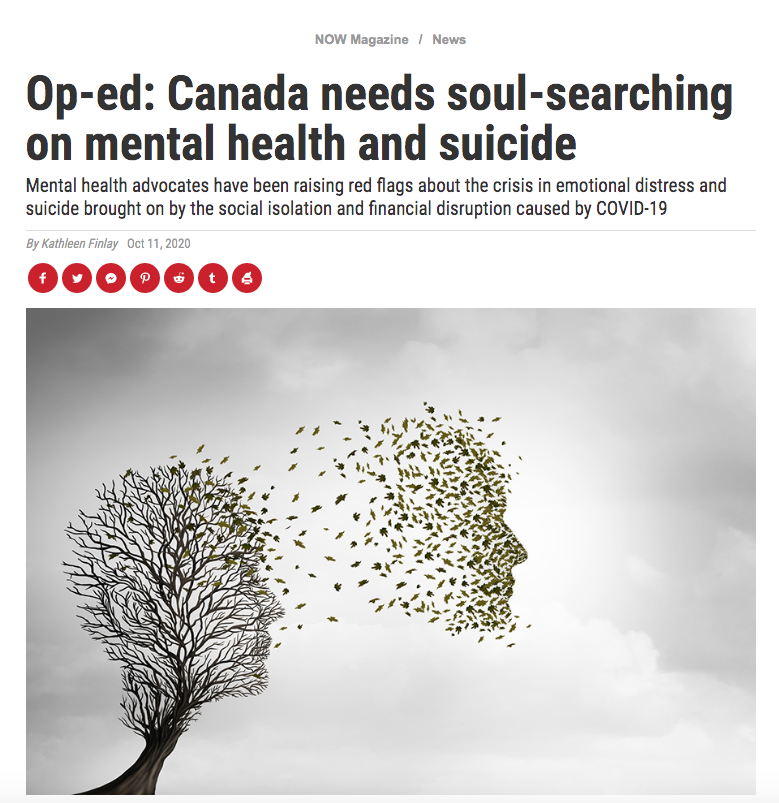 Interview on CTV National News on the dangers of wrong diagnosis.