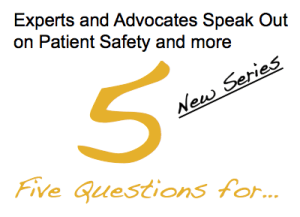 What’s the latest thinking on patient safety from leading experts and family advocates who have experienced hospital harm?

To answer that question, The Center for Patient  Protection is talking with the top movers and shakers on subjects that are of vital importance to patients, families and everyone who values safe care, delivered in a transparent setting and free from the staggering human and financial costs of preventable harm.

It’s one of a number of new initiatives launched by The Center to generate awareness of an issue that remains among the most serious challenges facing the healthcare system in the United States and Canada, and in numerous other high-income nations.

Our new series is called Five Questions For….

Today, Kathleen Finlay, founder and CEO of The Center for Patient Protection, interviews the renowned Ashish K. Jha, MD, MPH.  Dr. Jha is a professor of Health Policy at the Harvard T.H. Chan School of Public Health, Director of the Harvard Global Health Institute and a newly elected member of the Institute of Medicine.  He is also a practicing general internist with the U.S. Department of Veterans Affairs.  In July 2014, Dr. Jha testified before a subcommittee of the U.S. Senate, chaired by Sen. Bernie Sanders (I-Vt), investigating medical errors in the hospital setting. Kathleen recently caught up with Dr. Jha in the midst of his busy schedule when he was good enough to share his views on our five questions about the current state and future of patient safety.

KF     Dr. Jha, thank you so much for this interview.  Let me begin by asking what led you to become involved in patient safety?

AJ     As a clinician, I found the harm we do to our patients to be unacceptable. I realized I had to work on improving the system of care for our patients.

KF    As far back as the IOM report in 1999, it was said that medical errors in the hospital setting take thousands of lives every year and leave many more times that number injured. Has the situation become better or worse since the IOM report, and what is the most significant barrier to further progress?

AJ     The situation has gotten marginally better. We have made good progress in a few areas, such as healthcare associated infections, but for most of the issues in patient safety, the situation remains little changed.

KF     If you were suddenly appointed czar of patient safety with unlimited power, what is the first change you would make?

KF     What is the most important thing a patient and family can do when they enter the hospital to protect themselves or their loved ones from medical errors and harm?

AJ     Be proactive, be vigilant, and ask lots of questions in a respectful but clear way about the care you or your loved one is receiving.

KF    Are there any thoughts you would like to leave with the families who have been devastated by the effects of medical errors and with the hospitals and healthcare professionals that contributed to them?

AJ     Remember that you are not alone. The effort to make care safer is a long one, but you have a critical role to play in insuring that patients of the future don’t suffer the same harm your loved ones did.

KF     Thank you Dr. Jha.  I know patients and families everywhere will appreciate your views and everything you are doing to make their experience safer.

After the tragic loss of his son, John Alexander, as a result of medical errors, Dr. James used his training in science to provide new insights into the staggering scope of hospital harm. In his game-changing re-examination of the outdated mortality estimates by the Institute of Medicine in 1999, he concluded in 2013 that the real number of hospital deaths occurring each year from medical errors in the United States is closer to 440,000. This has become the new gold standard for patient safety advocates. In July 2014, it was adopted by a subcommittee of the United States Senate, where Dr. James testified.

Founder of Patient Safety America and author of the 2007 book Sea of Broken Hearts, Dr. James continues to advocate for changes to make hospital practices safer and more transparent.  He lives in Texas, where he is chief space toxicologist for NASA.

Dr. James was interviewed by Kathleen Finlay, founder and CEO of The Center for Patient Protection.

KF         John, I’d like to start by asking what led you to become involved in patient safety?

JTJ        The lethal negligence of my son’s cardiologists and the dishonesty in his medical records set me on the course. I was further impelled by the realization that he was not alone. Some estimates at the time, not from the IOM, placed the death toll from mistakes near 300,000 per year. This is a serious and largely unrecognized problem in the U.S. healthcare system.

KF         As far back as the IOM report in 1999, it was said that medical errors in the hospital setting take thousands of lives every year and leave many more times that number injured. Has the situation become better or worse since the IOM report, and what is the most significant barrier to further progress?

JTJ        My guess is that it has not changed much since those days. Medical care is much more complex and technology driven. You have to remember that the IOM report was based on 1984 data. Now we have guidelines and can recognize errors of omission much better than when guidelines were in their infancy. I’d like to think that the massive, yet spotty efforts of so many have made a difference, but the data are sparse. According to CDC estimates the number of hospital acquired infections has dropped by about 25,000 since the early 2000s. We have only scratched the surface in dealing with preventable adverse events.

KF         If you were appointed czar of patient safety with unlimited power, what is the first change you would make?

JTJ        I’d grant a bill of rights to every patient, and I’d make sure it was enforced in every hospital, nursing home, and ambulatory care center. There would be no nonsense – all patients would know their rights and if they are violated, then the justice department can get involved. I have declared what those rights should be in my 2007 book “A Sea of Broken Hearts.” The playing field between patients and providers is steeply tilted in favor of the provider community. That must change.

KF        What is the most important thing a patient and family can do when they enter the hospital to protect themselves or their loved ones from medical errors and harm?

JTJ        Stay totally involved in the patient’s care. Ask questions until you understand what is going on, what is planned, what the alternatives are, and what the risks are. You have to be reasonable with questions, so work on building a pleasant relationship with the staff. On the other hand, do not take bull S&*( for an answer.  You do not want to know that the risk of a procedure is low; you want to know specifically what the risk is in the hands of the person who will do it.

KF         Are there any thoughts you would like to leave with the families who have been devastated by the effects of medical errors and with the hospitals and healthcare professionals that contributed to them?

JTJ         You owe it to the one devastated, once you have managed your acute grief, to do all you can to stop the carnage of medical errors. You also have to forgive those who caused the harm, but you do not have to forgive the system that has allowed harm to go on far too long.  Those responsible for our broken system are well supported by the medical industry, so it will take courage and patience to go after those entrenched in power with no accountability.

KF         Thank you for your insights, John, and all the service you are doing on behalf of patients and families everywhere.

Comments and questions on our series can be sent to info@patientprotection.healthcare. Please indicate if you would like your comments to be published.