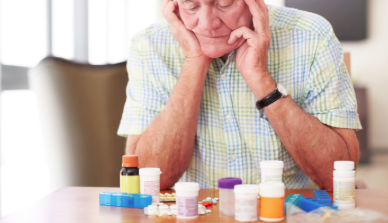 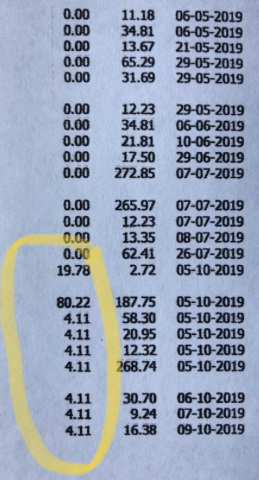 UPDATE: This is an image documenting payments made by a senior who had been on the Ontario Seniors Drug Co-pay Program in 2017 and 2018 and then was cut from it effective August 1, 2019.  When asked about this situation by the media, staff of Ontario Minister of Health Christine Elliott falsely claimed no one had been cut from the program.  It’s been 12 weeks since the Minister was contacted by The Center for Patient Protection on behalf of affected seniors.  We are still waiting for a response.

In the case of the senior who sent us this information, they had to save up for several months after being cut from the plan in order to be able to pay the $100 deductible and $4.11  co-payment for each prescription filled.  Had to forego some vital BP medication and cut pills for diabetes in half for more than two months.

Note that in the months prior to October, all payments were covered by the program. It is clearly a hardship on low income seniors that should not be happening and which the Minister of Health needs to address urgently.

Why are the most vulnerable always at risk at the hands of the Ford government?

The Center for Patient Protection has received numerous messages of concern from elderly citizens who found themselves axed from the Ontario government’s Drug Co-payment Program. They had been receiving benefits up to August 1, 2019 and then were suddenly dropped because they were told they were making too much money. It seems like just another way for the Ford government to make its financial house look better by saving money on the backs of the most vulnerable.

These are seniors whose total income is less than $20,000 — all of it coming from federal Old Age Security and Guaranteed Income Supplement benefits and Ontario’s GAINS program. These programs are available only to the poorest of seniors.  These are not new applicants to the program; some have been on it for several years.

Some alarmed seniors have said they will have to stop taking medication altogether for several months until they can save enough money to cover the $100 deductible. Others say they will cut their pills in half to reduce the burden of the co-payments.

This will impose a huge and unexpected financial burden on our poorest citizens at a time when they can least afford it — and their health is at risk because of it. Some alarmed seniors have told The Center for Patient  Protection that they will have to stop taking medication altogether for several months until they can save enough money to cover the $100 deductible that they did not anticipate and is outside their monthly budget.  Others say they will cut their pills in half to reduce the burden of the co-payments.  It is not uncommon for seniors to be taking 10 different medications a day. Some of these are for chronic conditions like diabetes, heart disease and for those at high risk of stroke. Being thrown off the program could have a catastrophic outcome for these seniors.

The Center reached out to Christine Elliott, Minister of Health in the Ford government, more than four weeks ago, to make her aware of the situation.  Despite this, and our interview on Global News Radio’s Morning Show on the risks being caused to affected seniors, the Minister has refused to respond or even acknowledge the concerns. This is what responsible Ontarians would define as an outrage. 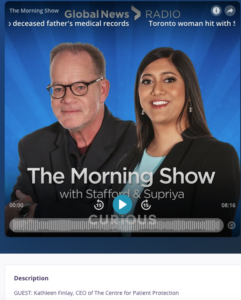 Apart from being completely disrespectful, such silence is needlessly leaving affected seniors in a state of extreme anxiety. That is irresponsible for anyone, and it is totally unforgivable on the part of a minister of health.

Urgent action is required to prevent irreparable harm being done to people who will be forced to go without life-sustaining prescription medications because they can’t afford the annual deductible fee and dispensing co-payment charges.

This is an important developing story, and we will keep you informed of our progress.