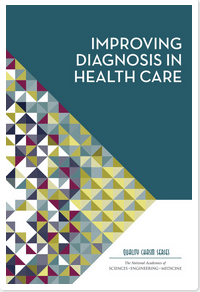 Will the IOM Report on Diagnostic Errors Make Any Difference?

Will the IOM Report on Diagnostic Errors Make Any Difference?

The prognosis for the IOM’s newest bombshell on diagnostic errors is not encouraging. Its first report in 1999 on medical errors promised a 50 percent reduction in 5 years.  Since then the number of deaths has soared to the point where hospital harm is the third leading cause of death in the U.S. and Canada.

What if a highly credible study revealed that, because of safety failures among automobile makers, most drivers will be involved in an accident in their lifetime, often with devastating consequences. Shock? Public outrage? Politicians demanding action?

All of the above would likely happen, and quickly.

But when the prestigious Institute of Medicine (IOM) revealed last week that most Americans will at some point be affected by a diagnostic error, often with adverse effects to their health, no such sentiments were noted. Even with the stunning fact that 1 in 10 patient deaths is estimated to be caused by errors in diagnosis, the mainstream media covered the story for a day. And then moved on.

Unfortunately, Americans who expect safe healthcare can’t do that. As for Canadians, once again they’re left totally in the dark on the subject, since there are no available estimates of the extent of diagnostic errors in this country.

The report, called Improving Diagnosis in Healthcare, comes a decade-and-a-half after the IOM’s landmark study on medical errors in the U.S. At that time, the Institute estimated that up to 100,000 Americans are killed in the clinical setting every year because of medical errors. But what happened after the release of that report does not bode well for this latest, and even potentially more impactful, bombshell.

The first IOM report set a min­i­mum goal of reducing hospital errors by 50 percent over the next five years. That was in 1999. Not only was the target not met, but the number of medical mistakes substantially increased. By 2010, a report from the Office of Inspector General for the Department of Health and Human Services warned that bad hospital care contributed to the deaths of 180,000 patients in Medicare alone in any given year.

More research led to the discovery of even higher numbers, including the estimate in 2013 by John T. James, a NASA scientist who lost his son to a fatal diagnostic mistake, which put the number of deaths from medical errors in the U.S. as high as 440,000 each year. This makes medical errors, most of which occur in the hospital setting, the third leading cause of death in America.

Add to that figure the number of U.S. patients harmed by hospital errors, which is estimated to be 15 million each year, and you have to ask what really was the impact of this 1999 report, which most healthcare experts describe as groundbreaking.

Canadian estimates have placed the number of deaths from medical errors and hospital acquired infections as high as 63,000 annually. Even a lower figure, provided by the University Health Network, of more than 30,000 deaths in 2014 from medical errors should be enough to send up red flags in front of every Canadian hospital.

But Canada has traditionally been slow to wake up to these potential harms in its healthcare system, as my recent Huff Post piece documented. How many Canadians will face a diagnostic error in their lifetimes, or when, if ever, a study like the IOM’s latest will be produced here, is unclear.

It’s hard to believe that Canada would be any more immune from the risk of widespread diagnostic errors than it is from conventional medical errors such as hospital-acquired infections (Canada has one of the worst rates among developed nations) or foreign bodies left in patients after surgery (Canada has the worst rate among G7 countries). And Canada’s wait times for elected surgery are the highest of reporting G7 nations.

But neither the U.S. nor Canadian figures capture the emotional harm experienced by families whose loved ones are killed, injured or left permanently disabled as a result of avoidable errors in the hospital setting. This impact was recently recognized by Sir Liam Donaldson, one of the world’s most respected medical authorities on the subject of patient safety.

Writing about the emotional damage to patients and families, Dr. Donaldson noted, “Too often, healthcare organizations, through their inept and unfeeling responses, amplify these later waves of harm rather than mitigating their damaging effects.”

In a stunning moment of frankness rarely seen at his level of global professional esteem, Dr. Donaldson also observed that “…too many healthcare organizations espouse the goal of safer care while regarding harm as the cost of doing business.”

In 1999, the IOM talked glowingly about the advantages of creating “patient centered care  that is respectful of  and responsive to individual patient preferences, needs and values.”  In its latest report, the IOM urged healthcare professionals to create “environments in which patients and their families are comfortable engaging in the diagnostic process and sharing feedback and concerns about diagnostic errors and near misses.” But as the views of Dr. Donaldson and so many patients and families confirm, progress in placing the patient and family at the pinnacle, or even the center, of the care process has been, at best, problematic and uneven.  Should we believe it will be any different moving forward with this report?

To bolster its case about the conditions that can lead to diagnostic errors, the IOM report highlights three real-life stories. In two of those examples, the patients and their families were either not listened to or had their concerns dismissed out of hand — both with dire consequences.

It is the same failure to be attentive to the concerns of patients and families and to put them at the center of care regimes that is the cause of incalculable and avoidable harm in our healthcare systems, whether in Canada, the United States, the United Kingdom or elsewhere.

Unfortunately, even after carefully noting the evidence about the damage of diagnostic failures, and the harm they may portend for the future, the IOM still does not recommend mandatory reporting, in a publicly accessible fashion, of diagnostic errors. The public is left out in the cold when it comes to being able to assess the performance of its healthcare institutions in diagnostic errors as well as more general medical mistakes.

Government agencies, like the U.S. Centers for Disease Control and Health Canada, which track causes of death from various conditions and diseases such as stroke and breast cancer, will not even acknowledge that there is a category called medical errors which represents the third leading cause of death in both countries.

This recent report from one of the most respected medical authorities in the world, is yet another jolting reminder that reducing harm to patients and families remains one of the foremost challenges facing our healthcare systems.

Oddly, even after this lightning bolt illuminating yet another costly contagion involving medical errors, none of that concern has yet to be registered by the national political figures vying for their parties’ presidential nomination in the U.S. or the party leaders in Canada’s current general election campaign.

The IOM apparently has no recommended treatment for myopic politicians who don’t recognize a healthcare crisis when it’s right in front of them.