Less to Canada’s Hospital “Never” List Than Meets the Eye

Less to Canada’s Hospital “Never” List Than Meets the Eye 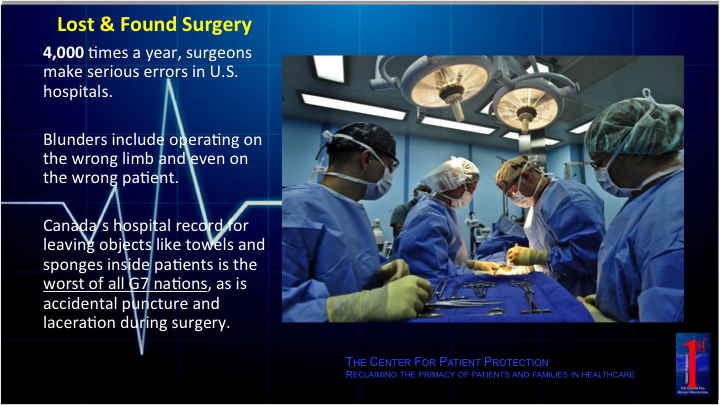 More than a decade late and half the size of the U.S. version, Canada’s hospital “never” list falls short in giving patients and families the protection they need

As of last Friday, sawing off the wrong limb became a “never” event in Canada. It’s one of 15 incidents the Canadian Patient Safety Institute and Health Quality Ontario say are preventable “using organizational checks and balances.” It is the first never list in Canada for which there is national consensus, according to the report.

But will it really do as much as it could to make patients safer? And since Canada’s list is a decade late and half the size compared with the U.S. version, you might wonder what else has been missed. The answer is plenty.

The idea of never events was first put forward by the U.S. National Quality Forum (NQF) in 2002. Since that time, they have moved on to expand the list to 29 incidents ⎯ twice the number the Canadian report has come up with ⎯ and have changed the term to Serious Reportable Events. More on that later.

What is on ⎯ and off ⎯ Canada’s new list is revealing. For instance, in the U.S. model, medication errors (which are a leading cause of hospital harm and add avoidable costs to the healthcare system) are listed as serious reportable events. That includes such things as giving medication to the wrong patient, giving the wrong medication, giving the wrong dose or delivering it by the wrong route. These events are not included in Canada’s version.

Death or serious injury connected with the use of hospital restraints and bed rails was also intentionally excluded from Canada’s list. It’s a long-standing never event in the U.S.

Since 2002, patient death or serious injury associated with a fall in a hospital has been a never event in the U.S. Hospital falls are not included on the Canadian list because the authors say they are “not always avoidable.” In the U.S., they are so important to avoid and so strongly viewed as being preventable that the U.S. Medicare and Medicaid systems will not reimburse hospitals in situations where falls result in death or serious injury to a patient.

Death or serious injury connected with the use of hospital restraints and bed rails was also intentionally excluded from Canada’s list. It’s a long-standing never event in the U.S.

And here’s one that’s really hard to fathom. U.S. authorities say maternal death associated with labor or delivery in a low-risk pregnancy must never happen. Canada claims these deaths are “not always entirely preventable,” so they’re not considered a never event.

Then there is the rather alarming standard Canada is setting when it comes to sexual or physical assault in a hospital. Canada’s view is that these incidents are “hard to reliably prevent” and that they are criminal matters in any event. The authors of the Canadian report say they don’t belong on their never list. U.S. healthcare experts say this kind of abuse is a never event for which hospitals must take responsibility.

The U.S. has had more than a decade to refine and test its never list. It has been subjected to intense scrutiny from every imaginable source, including a very active patient safety movement. Can we really believe the “light” edition of Canada’s untested never list is going to keep patients safer than the U.S. version?

In addition to having a more inclusive list, the U.S. has shifted its focus from never events to what it calls Serious Reportable Events.

The emphasis here is on “reportable.” NQF strongly urges mandatory reporting of such incidents as a key patient safety measure. A number of states have passed laws requiring hospitals to report these events. The authors of the Canadian list only want to encourage such reporting, even though disclosure, transparency and reporting have become universal watchwords for safer healthcare. Canada already falls far short in public reporting by its hospitals compared with the U.S.

The U.S. system has moved forward in another important way. Healthcare experts there have begun to develop a list of “always” or “must do” events. Recently, for instance, the Boston-based Lucian Leape Institute of the National Patient Safety Foundation, a world-renowned patient safety organization, recommended that performing hand hygiene before and after patient contact be made mandatory and classified as a “must do” for all healthcare workers.

Canada is not even close to developing that kind of approach, despite having an infection control rate in its hospitals that is one of the worst in the industrialized world.

As part of its consultation process leading up to the final report, the authors invited selected groups to complete an on-line survey. Some 158 groups and organizations responded. Eighty-five percent were healthcare professionals and administrators. The report does not say if any patients and families responded to the survey.

My experience is that patients and families who have been harmed by medical errors in the hospital setting have a lot to offer about what needs to be done to make the system safer. Many are especially articulate about the emotional harm their experience caused. I hear from them every day. It would have been helpful to see their input more prominently reflected in this report.

Something else the report left out: the stark reality that in Canada, hospital errors are the third leading cause of death. That means they claim more lives than strokes, Alzheimer’s, kidney disease, breast cancer and train, airline and automobile accidents combined.

Patients and families are looking for real answers about what will be done to make their hospital stay safer. Unfortunately, Canada’s never list, slow to emerge in the first place, misses the mark in giving patients and families the protection they need.