(Please note that as of January 13, 2021, O. Reg 13/21 imposed a moratorium on enforcement of residential evictions and writs of possession in Ontario as part of the Emergency Management and Civil Protection Act.)

Toronto, November 23, 2020.  A prominent patient safety and mental health advocate, alarmed over the tidal wave of evictions and telecom disconnections that are leaving the most vulnerable homeless and more isolated during the surging pandemic, is calling on governments to intervene and prevent more irreparable harm from occurring.  She is also urging the rapid roll out of a new national mental health crisis lifeline using the numbers 988.

Kathleen Finlay, CEO of The Center for Patient Protection and founder of the Campaign to Bring 988 to Canada  says “Governments claim they recognize the toll the virus is taking on mental health and mounting suicide rates, yet they are completely oblivious to the life-shattering consequences of their own inaction.”

Finlay cited provincial governments which still permit evictions and foreclosures even in COVID-19 hotspots. “Hundreds of families have been thrown out of their homes in Toronto alone since the moratorium was lifted in August.  Risking the lives and emotional health of families with children and our most vulnerable by throwing them into the streets during a raging COVID-19 winter is nothing short of a modern crime against humanity,” she said.

Across Canada, even in regions facing lockdowns, there has been no move to reinstate the moratorium on evictions and foreclosures that was in effect during the first wave of the pandemic. “These evictions and threats of eviction are causing incomprehensible suffering among those already disproportionately impacted by the fallout from COVID-19. I hear from folks struggling to cope every day. It is heart-wrenching. We need more mental health advocates and healthcare professionals speaking out about this,” Finlay said.

At the same time, the federal government has failed to place a temporary hold on giant telecoms cutting off telephone and internet services of customers who are behind in paying their bills.

“Disconnecting these lifelines at a time of unprecedented emotional  stress caused by the pandemic leaves people more isolated and less able to get help just at the very time they need it most.  This is happening while suicides are on the rise in Canada.”

Finlay also called for the fast track roll-out of a new, easy to remember, quick to dial nation-wide three-digit lifeline for mental health crisis and suicide prevention using the numbers 988.  That system is already being rolled out in the U.S.

“988 is a game-changing innovation for suicide prevention because it would replace Canada’s confusing multiplicity of local numbers when seconds count in getting needed help,” she added.

“I’ve been shocked at the lack of interest shown by the federal government in the 988 lifeline system, which I introduced to Canada 16 months ago. This is mental health negligence, pure and simple,” said Finlay.

“In Canada today, we have the equivalent of several Titanics filled with desperate souls who will be lost if we don’t act now. Time is running out. We need to demand that governments move with all possible speed to save them,” Finlay ended.

The Center for Patient Protection is one of Canada’s foremost patient and family centered advocacies focusing on the safer delivery of healthcare services and innovations in mental health care.

The Campaign to Bring 988 to Canada seeks to create a new, easy to remember, three-digit dialing number using 988 as Canada’s national lifeline for suicide prevention and mental health crisis.  Kathleen’s relentless work on behalf of families of victims of suicide to bring 988 to Canada was featured on CTV National News in January 2020, which called it “three numbers that could make all the difference.” 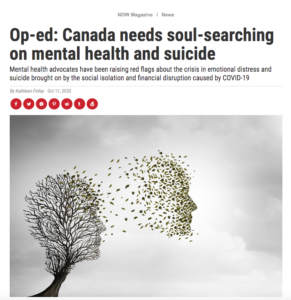 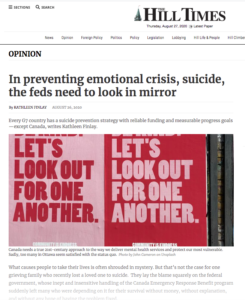 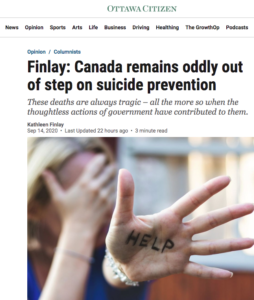 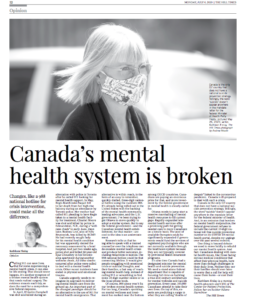 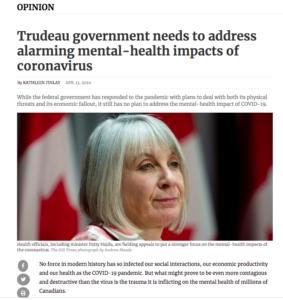 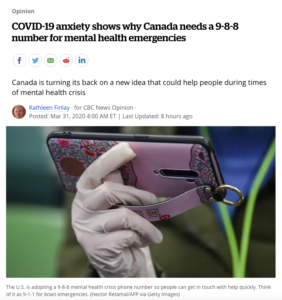 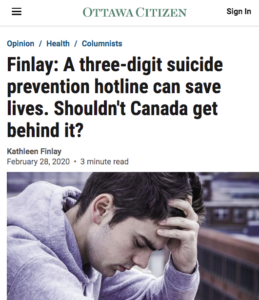 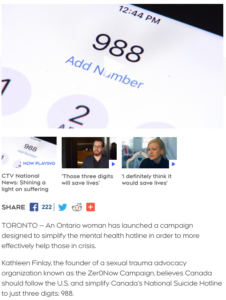