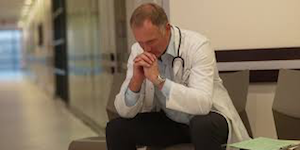 Apology after harm should be the rule, not the exception.

The Virtue of Saying “We Are Sorry”

An apology in the face of medical harm can be a powerful and inexpensive tool in the healthcare setting that affords benefits to everyone.  As a healing device, it helps to restore the sense of dignity and respect so often lost by those who have been harmed. It shows that the institution has learned from the experience, which is something patients and families who have suffered pain or loss desperately want to see acknowledged.  It can allow them to move forward once that measure of accountability is provided. Just as important, it gives the institution and clinicians involved in the error a way of reclaiming their own dignity and humanity.

Done the right way, an apology can be a powerful instrument of healing.  But it is still the exception when medical errors happen. As Kathleen Finlay, CEO of The Center for Patient  Protection, observed in The Huffington Post,

There is considerable literature supporting the apology concept when things go wrong in healthcare, and it has been extensively adopted in some European countries, where it has been linked to fewer malpractice lawsuits. But in Canada, the idea is about as far away from being widely accepted as free parking is at hospitals.

The Center’s Apology  Protocol is a unique, principle-based approach that is now available to meet the needs of conscientious and compassionate providers, and especially the patients and families who long for it.

It is a well accepted doctrine of ethics that the test of a person’s character is not whether they make a mistake, since we all do. It is how one owns up to that mistake and tries to make it right that is the defining measure of a person’s moral core. Some believe that, done correctly, an apology is nothing less than the deepest form of communication between one human soul and another.

Enlightened providers looking for principled outcomes in situations that have proven challenging may wish to contact The Center for Patient  Protection to explore the advantages of our Apology  Protocol.

What Patients and Families Can Teach Hospitals About Avoiding Harm

Our Healthcare Systems Need a Strong Dose of Compassion

Canadian Doctors Should Learn to Apologize

Full Disclosure and Apology—An Idea Whose Time Has Come

Excerpt from an article by Lucien Leape, M.D.

The case for apology is very different from that for disclosure. Apology is not an ethical right, but a therapeutic necessity. Apology makes it possible for the patient to recognize our humanity, our fallibility, our remorse at having caused harm. It “levels the playing field.” It makes it possible for the patient to forgive us. Apology is necessary for healing, for “getting over it.” It doesn’t always work. Sometimes the patient’s anger is too great for forgiveness. But healing cannot occur without it. To be effective, it must be a true apology, in which the caregiver takes responsibility for the event and shows remorse and a desire to make amends.

“I’m sorry this happened to you,” is no substitute, for it lacks responsibility and remorse. Making amends should include reimbursement for expenses as well compensation for long-term disability. Apologizing is also necessary for healing of the doctor or nurse who made the error. They, too, are emotionally traumatized. They are the “second victims,” devastated by having been the unwitting instrument that seriously harmed another. They feel shame and guilt that sometimes can be overwhelming. Apologizing, expressing their remorse and desire to make amends, can lead to forgiveness and healing for them as well. So apology is a balm for both the patient and the caregiver. It heals their psychological wounds.