Protecting doctors by having the public pay part of their insurance premiums harms true accountability to patients and families.

Kathleen Finlay is Canada’s foremost voice when it comes to ending the abuse of the taxpayer-funded Canadian Medical Protective Association. Describing it as a rigged system of legal aid for the same doctors who have harmed patients, she was the first to call for an end to government subsidies for this giant medical protection scheme. Taxpayer-funded defence of doctors even extends to instances of sexual misconduct and sexual assault or when healthcare professionals have fabricated allegations of assault to discredit patients and families. As Kathleen said on CTV National News, government support of the CMPA through taxpayers amounts to a form of institutional betrayal that creates a further wave of emotional trauma for those already harmed by this perverse arrangement. It’s time to bring an end to this rigged system, and move patients safety into the 21st century.

For years, the Canadian public has shoveled millions of dollars into subsidizing the liability insurance of doctors. The result is the Canadian Medical Protective Association (CMPA), an organization run by a group of lawyers that has amassed a war chest of some $4.5 billion (in 2019) to fight malpractice claims.  So rich has this Frankenstein-like creation of government become that “The CMPA would spend $100,000 protecting the doctor against a $5,000 claim,” as one former Canadian judge observed. 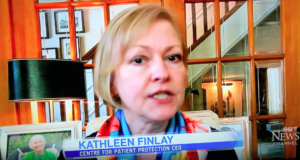 See Kathleen Finlay’s interview on the CTV National News about the CMPA.

It works out well for doctors and their lawyers, but it is an insult to any concept of fairness and accountability for injured patients and aggrieved families who seek justice, or even answers.  Time and again, patients and family members have contacted The Center for Patient Protection to share the nightmare of their experiences involving the CMPA.

As University of Alberta law professor Gerald Robertson noted in a 2008 study, “One must seriously question the efficacy of a model which compensates so few who are entitled to it.” Only about 2 percent of patients injured by negligence in Canada receive compensation.

Indeed, low-income patients and families who have been harmed by negligence are often unable to pursue their cases because they lack the financial resources to do so.  They are not eligible for legal assistance.  But the doctors who may have committed the harmful act are fully subsidized by taxpayer funds when it comes to their legal representation.

This one-sided public funding of legal representation for the medical profession prompted former Ontario Chief Justice Charles Dubin to comment, “Although it is in the public interest that any person charged with a criminal offence be properly represented, it seems difficult to justify public expenditures to place doctors on a different footing from other accused persons.”

It is hard to imagine how this arrangement is not anything but a serious impediment to the concept of accountability and, therefore, to safer patient care. The deal is a creature of policy makers in the early 1900s, a time when ideas about transparency and accountability, like the vote for women, the minimum wage, child labor laws and federal inspection of meat products, were non-existent.

It’s Time for a Shakeup in Our Healthcare Complaints System

Read Kathleen Finlay’s widely quoted article on the CMPA in The Huffington Post.

The Center for Patient Protection call for the elimination of taxpayer support of the Canadian Medical Protective Association cited in Gibson: Is It Time to Adopt a No-Fault Scheme to Compensate Injured Patients? (University of Ottawa Law Review)

Further reading on the subject, from the perspective of patients and families, is available at these links:

In 2003, CBC News broadcast Inside the CMPA,[7] the first in-depth look at the Canadian Medical Protective Association. Featured was former CMPA insider Paul Harte who broke with that organization and is now highly critical of it. Harte offered firsthand, material knowledge of the organization. The broadcast discussed five patients (Morgan Bystedt, Betty O’Reilly, Shannon Shobridge, Anne McSween, and Lorraine Emmonds) who suffered serious injury or death due to medical negligence. They were subjected to what some have described as deliberate wearing-down tactics from the CMPA. Lawyer Pete Mockler was quoted as saying, “…the CMPA fights them so hard… They basically take the view that anyone suing a doctor is in the extortion business.”

“It is driven by protecting the doctor’s reputation, almost at all costs. The CMPA would spend $100,000 protecting the doctor against a $5,000 claim. The CMPA may keep a low profile, but if you sue a doctor, it’s almost always the Canadian Medical Protective Association running the show. Ninety-five percent of Canadian doctors are members. Just how far will the CMPA go to protect a doctor? The legal strategy is well worn: Deny the doctor did anything wrong, even when the negligence seems pretty clear. That’s their strategy. It’s coordinated across the country. It’s intended to make these cases as difficult as possible for plaintiffs. The truth is, few plaintiffs – or their lawyers – survive the CMPA’s suffocating tactics.” [7]

Critics argue that public money should not be used to defend doctors accused of negligence or other wrongdoing[8] Civil trial lawyers fear that subsidies paid to fund the defence of doctors creates an unequal playing field for patients who hope to pursue a medical negligence case. They argue that the government is funding one side of a legal dispute, but not the other.[9] Former Ontario Chief Justice Charles Dubin commented that: “Although it is in the public interest that any person charged with a criminal offence be properly represented, it seems difficult to justify public expenditures to place doctors on a different footing from other accused persons.” [10]

One MD was charged in criminal court for sexually assaulting multiple patients, was convicted, then was sued by those victims in civil court. The CMPA funded the doctor’s criminal defence, and later the CMPA funded the doctor’s civil defence. The CMPA, however, will not pay civil damages to a patient assaulted by a doctor even if the assault occurred during a medical exam. This scenario is seen by critics as stacking the deck against victims attempting to seek redress from physicians.[11]

In 2008, Ontario taxpayers spent $112 million to subsidize the medical malpractice fees paid by doctors. Doctors themselves paid $24 million, which means taxpayers picked up 83 percent of the cost of the malpractice fees. The subsidies paid to the CMPA are part of a “Memorandum of Understanding” between the Ontario Ministry of Health, the Ontario Medical Association, and the Canadian Medical Protective Association. Details of this Memorandum of Understanding between the parties were kept from public view until a court ordered it released following a Freedom of Information request in 2008.[12]

Former CMPA executive director and CEO Dr. John Gray explained that while Ontario doctors’ invoices from the CMPA will rise dramatically, the provincial physician reimbursement program will be in effect. ‘‘So their out-of-pocket will be no different than they were in 2011/12. The money they pay to CMPA will increase, but they will be eligible to have much of that reimbursed.’’ [13]