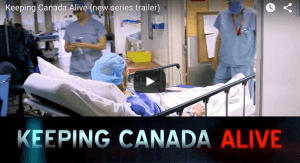 Deaths from med­ical mis­takes occur one patient at a time. Yet, taken together in Canada, they are the equiv­a­lent of a large city bus full of pas­sen­gers crash­ing and killing every­one on board every day of the year.  So why is there so little focus on this epidemic of harm?

The wonders of the Canadian healthcare system are currently on display in two separate television series. In the six-part CBC program, and in a weekly installment on the Global Network, we see doctors and nurses performing heroic measures that sustain life and deliver comfort in a busy hospital setting. The patients are uniformly grateful. Audiences are left thankful and reassured. Tears of joy abound.

Except this picture is incomplete. The fact is that, while our hospitals save lives every day, they are also the third leading cause of avoidable death every year.

In Canada, medical errors and hospital-acquired infections claim between 30,000 and 60,000 lives annually. Thousands more are injured. Then there is the ocean of emotional harm that engulfs families when a loved one is lost to the kind of hospital mishap experts say is often preventable.

But to the public, these incidents are largely invisible. We don’t see, and there aren’t any television programs that capture, the patients who die from falls or medication errors. We can’t witness the agony of a patient suffering from a pressure ulcer that could have been prevented or a botched surgery. Hidden from our gaze is the suffering that hospital-acquired infections cause, killing between 8,000 and 12,000 Canadians every year.

How is it possible that this part of our healthcare system remains largely out of sight and out of mind for most Canadians?

For one thing, many families just don’t know that a medical error caused the death or serious injury of a loved one. Hospitals tend to be less than forthcoming in admitting responsibility when they think legal action might ensue or bad publicity will result. When it comes to disclosing a mistake or explaining why it happened to a grieving family, many healthcare providers erect a wall of silence. The truth about hospital harm often remains in the shadows.

Another reason: hospitals today are big business. Raising huge amounts from wealthy donors has become standard operating practice. Healthcare providers have armies of public relations handlers, lawyers and industry associations whose job it is to put the best spin on what hospitals are doing, especially with the mainstream media. Bad news doesn’t fit with the desired image.  Also, hospital boards are made up of some of the most influential figures in society.

In Canada, hospitals and governments are joined at the hip. If you criticize hospitals, you are taking on the government.

Entrenched interests can be powerful interests.  It’s not really surprising that patients and families reaching out to my non-profit advocacy, The Center for Patient Protection, commonly report a lack of response on the part of the mainstream media, including healthcare journalists, when they have attempted to share their tragic experiences. (Until recently, the publisher of one of Canada’s largest newspapers was a director of Sunnybrook Health Sciences Centre, one of Canada’s largest teaching hospitals.)

Canada’s hospital incident reporting is also less transparent and user-friendly than it is in the U.S., where a number of rating systems publicly grade a hospital’s safety record and patient satisfaction scores.  When organizations know that what they do —and do not do— is likely to come to light, they tend to be more careful in their everyday actions.

But by far the greatest reason why there is little pressure to make hospital harm more visible and demand safer patient outcomes is that, in Canada, hospitals and governments are joined at the hip. If you criticize hospitals, you are taking on the government. And that’s no exaggeration.

Governments are the main funders of our hospital system. And Canadian provinces contribute as much as 100 percent of the cost of a doctor’s liability insurance coverage. As I described a few months ago in this space, this has helped to create the monolith that is known as the Canadian Medical Protective Association (CMPA).

With a war chest in the billions of dollars, the CMPA throws its weight into defending doctors in court actions and even in complaints made before professional regulatory bodies like the Ontario College of Physicians and Surgeons. As many patients or surviving family members tell me on a regular basis with their tearful stories, the CMPA is the 800-pound legal gorilla that ordinary folks can’t compete against. This, coupled with other woefully inadequate government mechanisms for redress when harm occurs, can quickly take all the oxygen out of a family’s quest for accountability.

I thought she was enter­ing the health­care ver­sion of the NASA space shut­tle pro­gram, where dozens of safe­ty redun­dan­cies were built into a sys­tem that would pre­vent errors and harm from occur­ring. I found out the hard way one cold Novem­ber morn­ing how wrong I was.

Finally, there is what I call the white coat complex. We like to think of our hospitals as gleaming temples of healing. It is natural to believe that the years of rigorous training doctors and nurses receive are the patient safety equivalent of the Good Housekeeping Seal of Approval.

I was blinded by this same rose-coloured misperception when my mother was suddenly admitted to a large Toronto teaching hospital a few years ago following a traumatic brain injury. I thought she was entering the healthcare version of the NASA space shuttle program, where dozens of safety redundancies were built into a system that would prevent errors and harm from occurring.

I found out the hard way one cold November morning how wrong I was. Medication that should never have been administered, and had not been approved by healthcare regulators for her condition, was given to her without my family’s knowledge or consent, which was required by law. There were well-documented warnings linking the drug to numerous episodes of sudden death, especially in the elderly. A cardiac arrest followed just hours later.

That was bad enough. But the evasion, disrespect and hostility I encountered from hospital officials as I sought answers for what happened produced waves of emotional distress that lasted for years afterwards.

You won’t see this episode presented in high definition, either.

Deaths from medical mistakes occur one patient at a time. Yet, taken together, they are the equivalent of a large city bus full of passengers crashing and killing everyone on board every day of the year. And that’s based on the most conservative figure of medical error deaths in Canada provided by the University Health Network.

If a fraction of these avoidable deaths was occurring as a result of safety breakdowns in our food supply or in the aviation industry, there would be outrage. Only in our healthcare system do we tolerate in silence such a lethal, and needlessly costly, epidemic of harm.

Yes, there are many tears of joy when the hospital system works well. But the sea of tears from all those whom it has harmed grows bigger every year.